Shattered Families: The Perilous Intersection of Immigration Enforcement and the Child Welfare System 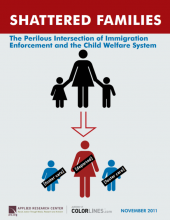 Immigration policies and laws are based on the assumption that families will, and should, be united whether or not parents are deported. Similarly, child welfare policy aims to reunify families whenever possible. In practice, however, family separation can last for extended periods.

In 2011, the United States deported a record-breaking 397,000 people and detained nearly that many. In the first six months of 2011, the federal government removed more than 46,000 mothers and fathers of U.S.-citizen children.

"Shattered Families" is the first national investigation on threats to families when immigration enforcement and the child welfare system intersect. It finds that (i) there are at least 5,100 children currently living in foster care whose parents have been either detained or deported; (ii) in areas of high immigration enforcement, children of non-citizens are more likely to be separated from their parents and face barriers to reunification; and (iii) immigrant victims of domestic violence and other forms of gender-based violence are at particular risk of losing their children.