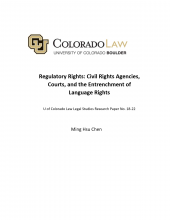 The "rights revolution" in the United States consisted of both sweeping changes in constitutional doctrines and landmark legislative reform, followed by decades of innovative implementation in every branch of the federal government -- Congress, agencies, and the courts. "Regulatory Rights: Civil Rights Agencies, Courts, and the Entrenchment of Language Rights" -- a chapter in a recently released book on the rights revolution and based on the author's research for her doctoral dissertation -- tells the story of how "policy entrepreneurs" within various federal agencies worked to extend civil rights protections to language minorities after the passage of the Civil Rights Act of 1964 and the Hart-Cellar Act of 1965.

Of particular importance were the actions of officials within the Office of Civil Rights (OCR) of the Department of Health, Education, and Welfare (HEW) and officials within the Equal Employment Opportunity Commission (EEOC). Their interpretations of the law, treated with some deference by the courts because of their superior expertise, were either upheld or constrained by the courts. Paradoxically, the courts seemed to grant greater leeway to the OCR, even though there was some lack of consensus as to appropriate educational remedies in the aftermath of the Lau v. Nichols decision of 1974. The EEOC, on the other hand, found their interpretations of the law repeatedly challenged by the courts.

The author reviews the "regulatory roller coaster" of the last 50 years and concludes that "regulatory rights rest on shifting ground" although they are "sufficiently rooted to remain," because the complexity and ever-changing nature of modern life make regulation an indispensable tool of government. (American Immigrant Policy Portal)