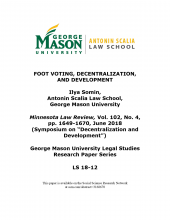 In "Foot Voting, Decentralization, and Development," legal scholar Ilya Somin reconceptualizes migration as a form of voting - a way for people to realize their potential in places more conducive to economic development. Such places may be states or regions within countries, or other countries. "Foot voting," according to the author, even has major advantages over regular ballot box voting. Foot voters have strong incentives to acquire relevant information to guide their actions - incentives which may be missing in ballot box elections where a single vote may appear inconsequential.  Moreover, in many parts of the world, elections are rigged or rarely held. According to Somin, the benefits of foot voting are not simply economic. For a large part of the world's population, foot voting may be the only way to exercise political choice.

Somin describes various steps that can be taken to improve institutional frameworks to achieve a "foot voting world." Domestic foot-voting can be promoted by eliminating impediments to move freely within subnational jurisidictions, such as China's restrictions on the movement of rural populations to cities. Another strategy is to devolve power and budgeting authority to local jurisidictions so that they have the capacity to design policies attractive to foot voters.  As far as international migration is concerned, "understandable objections to expanded migration should be addressed by a combination of assessing whether the objection is overblown, implementing keyhole solutions, and - where necessary - tapping the wealth created by immigration to mitigate negative side effects and compensate adversely affected natives." While foot voting is not a panacea, the author argues "it is difficult to think of any other development initiative that can bring such vast benefits to so many people." (American Immigrant Policy Portal)