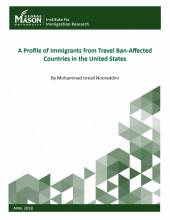 A Profile of Immigrants from Travel Ban-Affected Countries in the United States looks at the geographic distribution and characteristics of the approximately 800,000 immigrants already living in the United States from seven of the countries covered by the travel ban imposed by the Trump administration on September 25, 2017:  Iran, Libya, North Korea, Somalia, Syria, Venezuela, and Yemen.

The data indicate that these immigrants are employed, highly educated, have high incomes, own their own homes, and are making impressive contributions to the larger society. Forty-six (46) percent have a bachelor's degree or higher, compared to 30 percent of native-born and 28 percent of all immigrants. The largest occupational cohort were architects and engineers, where 7 out of every 1,000 individuals employed in these professions were from travel ban-affected countries. Dentistry also ranked high on the list of occupations (28 out of every 1,000).

The author worries that "the United States may be denying admission to highly educated and skilled individuals who could be making significant contributions to the United States." At the same time, immigrants already living in the United States may have suffered great harm by losing physical contact with loved ones abroad and by deciding not to travel abroad for fear of not being allowed to return. (American Immigrant Policy Portal)

Nooraddini, M. I. (2018). A Profile of Immigrants from Travel Ban-Affected Countries in the United States. Fairfax, VA: The Institute for Immigration Research. Retrieved from https://d101vc9winf8ln.cloudfront.net/documents/28060/original/TravelBanReport_042018_FINAL.pdf?1524517566