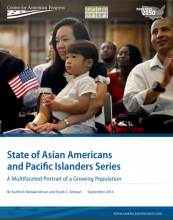 During the last decade, more immigrants came to the U.S. from Asia than from any other region of the world, including Latin America. However, as authors Karthick Ramakrishnan and Farah A. Ahmad argue, data on Asian Americans and Pacific Islanders (AAPIs) are not easily available or presented in an accessible fashion. To address this problem, they developed six fact sheets on AAPIs covering the following topics: public opinion, demographics, education, immigration, language diversity and English proficiency, and civic participation and democracy. The fact sheets, according to the Center, provide an "unprecedented" look at this community. AAPIs tend to be progressive on a range of issues. Compared to the U.S. average, for example, AAPIs favor bigger government and more services. Their impact on education continues to increase with AAPI enrollment in K-12 growing fourfold between 1979 and 2009 and by another 31 percent by 2019 (projected). Given their tremendous diversity in national origins and ethnicity, their language diversity and English proficiency have serious implications on education and workforce development. Immigration, too, is a key issue for AAPIs as about two-thirds of Asian Americans are immigrants. The fact sheets also note the rising number of Asian American voters, who voted decisively for Barack Obama in the 2012 presidential election.

Get more information at The Center for American Progress.