Revisiting America’s Demographic Challenge: How Increasing Immigration Can Bring the United States Out of the Covid-19 Economic Slump and Maintain Its Global Competitive Edge 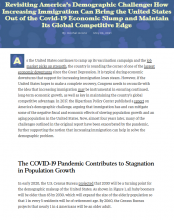 According to the Bipartisan Policy Center, a less restrictive approach to immigration policymaking will be the key to ensuring long-term economic growth in the U.S., especially to overcome the COVID-19 economic recession. In fact, without effective immigration reform, the U.S. will sacrifice its position as the world’s largest economy by 2030 and leave the reserves of vital programs like Social Security depleted by 2034. In “Revising America’s Demographic Challenge: How Increasing Immigration Can Bring the United States Out of the Covid-19 Economic Slump and Maintain Its Global Competitive Edge,” the author analyzes a variety of economic and demographic data showing the contributions of immigrants to the U.S. economy and discusses the economic consequences of different future immigration policy scenarios. Research indicates that economic growth and population growth are closely linked. However, because of the pandemic-induced economic slowdown, decreasing birth rates among the U.S.-born and low immigration rates in the past several years, the author posits that to regrow the country’s population and the economy once again, well-crafted immigration policies are the federal government’s most effective tool. She cites data from FWD.us, which projects that if the United States were to double its immigration levels, its gross domestic product would also double by 2050 (reaching as much as $47 trillion). However, current immigration levels are not sufficient to mitigate the impending consequences of an aging population or to facilitate a robust post-pandemic recovery. Thus, the author concludes, it is vital that Congress enact long-lasting immigration reform that recognizes the economic and demographic benefits that immigrants have to offer. (Kyla Schmitt for The Immigrant Learning Center’s Public Education Institute)