A Rockier Road to U.S. Citizenship? Findings of a Survey on Changing Naturalization Procedures 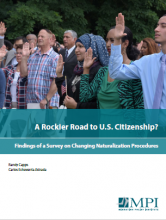 Becoming a citizen benefits immigrants and U.S. communities in a variety of ways, including by promoting integration and enabling immigrants to vote and run for public office, sponsor close relatives for immigration, and travel visa free to many countries. Citizens also earn more than noncitizens with similar characteristics, and these higher earnings lead to greater economic activity and higher tax payments.

For the approximately 9 million immigrants eligible to naturalize, however, the hurdles to becoming a U.S. citizen appear to be growing. This report presents the Migration Policy Institute’s analysis of a 2019 national survey conducted by the Immigrant Legal Resource Center of 110 naturalization assistance providers. The study aims to understand how U.S. Citizenship and Immigration Services (USCIS) naturalization procedures have changed during the Trump administration.

USCIS continues to approve the vast majority of citizenship applications, with an approval rate that has hovered around the 90-percent mark since fiscal year 2010, but the time it takes to process an application has grown considerably. This appears to be due at least in part to changing adjudication policies and practices, including those described by the surveyed organizations:

These changes were underway before a trio of new 2020 developments that threaten to further increase the application backlog and make it more difficult for eligible immigrants to access citizenship: a COVID-19-related suspension of USCIS operations for three months, the likely furlough of two-thirds of the agency’s staff due to a major budget shortfall, and a planned increase in the cost of filing a citizenship application alongside new restrictions on eligibility for fee waivers for low-income applicants.