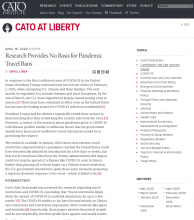 In response to the first confirmed cases of COVID-19 in the United States, President Trump restricted most travel from China on February 2, 2020, while exempting U.S. citizens and their families. The next month, he expanded it to include Iranians and most Europeans. By the end of March, the U.S. State Department largely ceased issuing visas to anyone.[1] These bans have remained in effect even as the United States has become the leading source for COVID-19 infections worldwide.[2]

President Trump and his advisors repeatedly touted these actions as demonstrating that they would keep the country safe from the virus.[3] However, a review of the research about pandemics prior to COVID-19 with disease profiles similar to influenza shows that the government should have known how ineffective travel restrictions would be at protecting the country.

The research available in January 2020 shows that extreme travel restrictions imposed before a pandemic reached the United States could have theoretically delayed its introduction by a few days or weeks, but that travel restrictions like those the Trump administration did impose could not stop the spread of a disease like COVID-19, even in theory. Rather than pinning all of those hopes on a Chinese travel restriction, the U.S. government should have spent those early moments preparing a vigorous domestic response to the virus—which it failed to do.