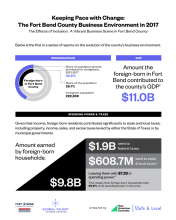 A new report from New American Economy shows that immigrants in Fort Bend County paid $2.5 billion in taxes and contributed $11.0B to the county’s GDP in 2017. The report, Keeping Pace with Change: The Fort Bend County Business Environment in 2017, was produced in partnership with the Fort Bend Chamber of Commerce. The report also shows that the arrival of immigrants increased the total housing value in the county by $580.2 million and that business income generated by immigrant entrepreneurs totaled $508.0 million.

In addition to their financial contributions, the report shows the foreign-born population’s role as contributors to the workforce in Fort Bend County. In 2017, immigrants were 49.0 percent more likely than the U.S.-born population to own their own businesses and were 36.2 percent more likely to be working age. Immigrants in Fort Bend County also made up 45.6 percent of workers in the local mining, oil and gas extraction industry, and 45.0 percent of workers in the local healthcare industry.