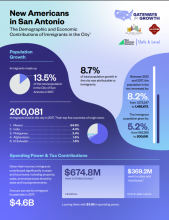 In addition to their financial contributions, including $531.7 million to Social Security and $134.5 million to Medicare in 2017, the report shows how critical immigrants are to San Antonio’s workforce. Immigrants make up a significant portion of several of the area’s most important industries, including 19 percent of science, technology, engineering and math (STEM) workers and nearly 23 percent of manufacturing and 35 percent of construction workers. Immigrants are creating jobs in San Antonio too — they account for 30 percent of all entrepreneurs in the city. The more than 17,000 immigrant entrepreneurs who call San Antonio home generated close to $360.7 million in business income in 2017.