Immigration and Entrepreneurship in the United States 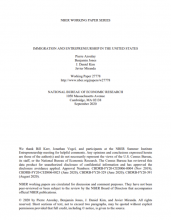 In assessing the impact of immigration on the U.S. economy, this paper seeks to explore and quantify the often overlooked process of immigrant job creation Too often, according to the authors, economists only examine the extent to which immigrant workers displace native-born workers. Researchers often reach conclusions that fail to take into consideration the broader benefits of immigration. Even with this narrow view, traditional economic theory is often thrown on its head by puzzling realities, as when the influx of Cubans during the Mariel boatlift did not lead to negative effects on local wages, or when areas with large concentrations of immigrants seem to outperform less immigrant dense parts of the country.

Using a variety of records to study firms founded in the U.S. between 2005 and 2010, these researchers find that immigrants appear to “create jobs” (expand labor demand) more than they “take jobs” (expand labor supply). The authors contend that it is crucial to study immigrants as both workers and entrepreneurs to get the full picture of immigrant contributions to the economy. Moreover, contrary to stereotype, immigrants do not just start small firms. “Rather, they tend to start more firms at every size, compared to U.S. born individuals.” Moreover, wages in immigrant-founded firms tend to be comparable, if not slightly higher, than in other firms. A non-technical summary of this paper may be found on the MIT Sloan website.

Immigration and Entrepreneurship in the United States.pdf
Citation: