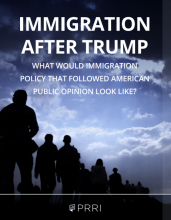 When it comes to U.S. treatment of immigrants and refugees, the American public favors policies closer to those of President Biden than those of former President Trump. This is the conclusion of a large public opinion survey conducted by the Public Religion Research Institute (PRRI) in September 2020. The PRRI survey breaks down results by partisanship, age, religious affiliation, race/ethnicity, education, and whether respondents obtained their news primarily from Fox TV. Americans favor legal status for those brought to the U.S. as children, In addition, majorities are opposed to the Muslim ban, blocking refugees from entering the U.S. and constructing the border wall; and a large majority are opposed to family separation. Only one-third of Americans say that immigration is a “critical issue” -- the lowest proportion since PRRI first asked the question in 2013. Three in ten Americans agree with the statement “immigrants are invading our country and replacing our cultural and ethnic background.” In this, as with most of the questions, there was a significant partisan divide. The one group consistently taking the harshest view of immigrants were Republicans who trusted Fox News to provide accurate information. On the question of immigrants “invading” our country, 67 percent of Fox viewers believed this was true. The one question in which a majority of Americans saw immigrants as a threat was on the question of job competition. A majority (55 percent) think that immigrants “compete with hardworking Americans for jobs.” The upshot is that President Biden can proceed with reversing Trump’s immigration policies and know he will have the support of the majority of the public. (Maurice Belanger, Maurice Belanger Associates)