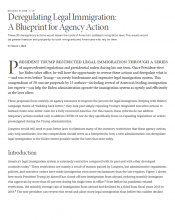 This compilation outlines an ambitious deregulatory agenda to permit more legal migration and legal employment within the confines of the restrictive laws that Congress has passed. The 15 writers include previous presidents of the American Immigration Lawyers Association, editors or authors of the most widely used immigration law reference texts in the United States, a former administration official, and other well‐​known immigration law experts. The 30 deregulatory proposals are organized into four categories: reforms affecting green card applicants on the path to permanent residence, reforms affecting nonimmigrants (visitors, students, and temporary workers), reforms affecting refugees, and, finally, big picture reforms affecting more than one category (Table 1). One reform would stop the practice of counting derivative relatives of primary applicants (spouses and minor children) against the numerical limit in a particular immigration category. Another reform would recycle unused visa numbers in future years. These improvements, according to the editors, would move America toward a more open system that provides millions of people with legal options to immigrate, work, and live in the United States.