At the Starting Gate: The Incoming Biden Administration’s Immigration Plans 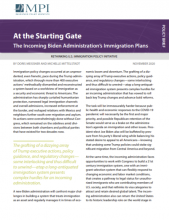 President-elect Joe Biden pledged during the campaign to reverse some of the most restrictive immigration actions undertaken during Donald Trump’s four years in office, including family separation and a travel ban on nationals from majority-Muslim countries. He also vowed to temporarily halt deportations, reinstate the Deferred Action for Childhood Arrivals (DACA) program, increase refugee admissions, and halt construction of the border wall.

This policy brief outlines some of the incoming administration’s top immigration priorities and examines challenges and opportunities ahead. Drawing on existing and forthcoming policy ideas from MPI’s Rethinking U.S. Immigration Policy initiative, the brief sketches several proposals that could begin to shape a U.S. immigration system that advances the national interest going forward.

The near-total shutdown of asylum at the U.S.-Mexico border, for example, does not represent a long-term strategy nor is it consistent with longstanding U.S. values. Effective long-term solutions to deal with mixed flows of economic and humanitarian migrants entail processes to provide fair, efficient processing of asylum cases, including by having the U.S. Citizenship and Immigration Services (USCIS) Asylum Division oversee the merits of border asylum cases to completion—an MPI recommendation the Biden campaign embraced. The brief, among other proposals, also recommends the creation of multiagency reception centers near the border for one-stop screening of arrivals and speedy turnover to the relevant agencies.