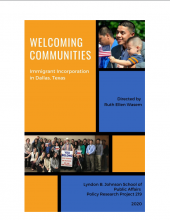 This report, based on research conducted by students at the Lyndon B. Johnson School of Public Affairs at the University of Texas, examines the strengths and weaknesses of the policies pursued by the City of Dallas in facilitating the integration of the city’s immigrants. The research team used integration measures developed by New American Economy (NAE), an organization that compares and ranks the integration policies of the 100 largest U.S. cities. The students also analyzed residential patterns and socioeconomic data of Dallas’s immigrants, and surveyed immigrants in two Dallas neighborhoods to assess their own perceptions of life in Dallas. The findings, presented to the city’s Office of Welcoming Communities and Immigrant Affairs, include a wealth of data on the immigrant communities in Dallas and the extent to which city assets are equitably accessed by those communities (for example, the location of workforce development resources). There is also data on the housing stock, and neighborhoods in danger of gentrification, with its attendant problems for current residents. Despite Dallas’s committed government leadership (it is the first city in Texas to earn “Certified Welcoming” status from Welcoming America), it ranked lower in NAE’s index on livability — homeownership rate, rent burden, overcrowding, health insurance coverage and educational attainment. The report includes a number of recommendations to address problems in these areas, as the city continues to strengthen its relationships with its immigrant communities. (Maurice Belanger, Maurice Belanger Associates)