The Household Financial Losses Triggered by an Immigration Arrest, and How State and Local Government Can Most Effectively Protect Their Constituents 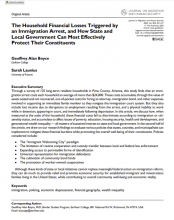 The true cost of an immigration arrest, both to the family involved and to the local community, is often under-reported and/or poorly understood. This study investigates the financial losses caused by an immigration arrest at the household level by surveying 125 long-term households in Pima County, Arizona. The survey demonstrates that the average cost at the household level of an immigration-related arrest, counting out-of-pocket attorney costs, seized or unrecovered assets, immigration bonds, lost income, and other expenses, averages $24,000. The authors find this amount is consistent, regardless of immigration or citizenship status. After calculating this amount, the study then analyzes state, county and municipal policies that could mitigate the financial strain that arrest produces and, if implemented, could save billions of dollars from being withdrawn from community circulation. Proposed policies include: promoting worker-owned cooperatives, expanding permissible forms of identification, and establishing universal, well-resourced representation for immigration defendants. The authors argue that while meaningful federal government action is the best way to protect immigrants from the material, financial and emotional consequences of arrest, governments at the state, county and municipal levels can take meaningful action to support their constituents. (Patrick Bloniasz for The Immigrant Learning Center’s Public Education Institute)

The Household Financial Losses Triggered by an Immigration Arrest, and How State and Local Government Can Most Effectively Protect Their Constituents.pdf
Citation:

Boyce, G. & Launius, S. (2020, December). The Household Financial Losses Triggered by an Immigration Arrest, and How State and Local Government Can Most Effectively Protect Their Constituents. Journal of Migration and Human Security. https://cmsny.org/publications/jmhs-immigration-arrest-boyce-launius-122720/