Discharge, Deportation and Dangerous Journeys: A Study on the Practice of Medical Repatriation 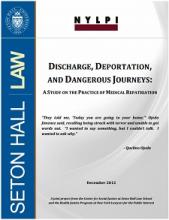 Discharge, Deportation and Dangerous Journeys: A Study on the Practice of Medical Repatriation reviews almost 1,000 cases of forced or coerced medical repatriation, defined as the decision of a hospital to return a critically injured or ill immigrant patient back to his/her native country without consent. Often, the quality of care available to these patients is inferior, family members and support networks are missing, and patients suffer and die.

According to the authors, the frequency of such cases will likely increase under the Affordable Care Act by reducing the pool of Medicaid Disproportionate Share Hospital (DSH) payments and by excluding an estimated 4.3 million undocumented immigrants from coverage. By tolerating coerced repatriation, the United States is violating its obligations under international human rights agreements. Moreover, hospitals are, in effect, preempting the authority of the federal government to deport individuals and denying them due process. In addition, hospitals often fail to inform immigrant patients of the immigration consequences of repatriation, which may include a 10-year bar on reentry to the United States.

The report includes many case histories and provides a series of recommendations to the U.S. Congress, HHS, the Department of State, hospitals, states, state courts, and community groups and advocates, designed to prevent the proliferation of this practice. (Abstract courtesy Nicholas Montalto, PhD.)