Author:
Engy Abdelkader
Date of Publication:
May, 2016
Source Organization:
Other 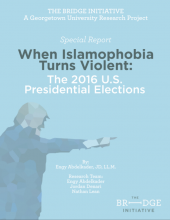 The mission of Georgetown University's Center for Muslim-Christian Understanding, since its founding in 1993, has been to build stronger bridges of understanding between the Muslim world and the West. Since the late 1990s, it has also studied the emergence and impact of Islamophobia. This report provides detailed information on violent incidents directed at Muslim immigrants and Muslim religious institutions in the U.S. from the beginning of 2015 through March of 2016.  The authors see a clear relationship between the heated, anti-Muslim politic rhetoric of Donald Trump and other Republican candidates for president and the increasing frequency of such incidents. Since the first candidate announced his bid for the White House in March 2015, there have been approximately 180 reported incidents of anti-Muslim violence, including: 12 murders, 34 physical assaults, 49 verbal assaults or threats against persons and institutions, 56 acts of vandalism or destruction of property, 9 arsons, and 8 shootings or bombings.  This represents a 17 percent increase over the number of anti-Muslim hate crimes in 2014. (Abstract by Prof. Nick Montalto)