The U.S. Undocumented Population Fell Sharply During the Obama Era: Estimates for 2016 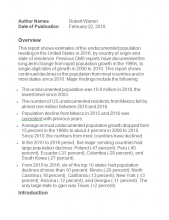 The undocumented immigrant population in the United States fell by nearly 1 million persons between the years 2010 and 2016 -- from 11.7 million to 10.8 million. The number of undocumented is at its lowest level since 2003. The largest undocumented group, persons from Mexico, has declined sharply. Undocumented Mexicans numbered 6.6 million in 2010 but fell to 5.7 million in 2016. Populations from South America (Brazil, Colombia, Ecuador and Peru) and Europe (Poland) also fell between 2010 and 2016. Three groups from Central America (El Salvador, Guatemala and Honduras) have increased in number in recent years, as have persons from Asian nations including India and China. Their growth, however, has not offset the decline of other groups. Only two U.S. states, Texas and Nebraska, registered an increase of 10,000 or more undocumented immigrants between 2010 and 2016. Nine of the ten largest states lost population including California (-367,000), Illinois (-118,000) and New York (-115,000). The greatest percentage declines were in Alabama (-37 percent), Mississippi (-32 percent) and New Mexico (-30 percent). Undocumented immigration rose in the 1990s by 145 percent and during the 2000s by 36 percent. The ongoing decline has been occurring across several administrations in Washington. Report author Robert Warren employs a methodology in which respondents to the American Community Survey are assigned immigration status based on key characteristics such as their period of entry, occupation, and likelihood of being immediate relatives of U.S. citizens. (Rob Paral, Rob Paral and Associates)

Warren, R. (2018). The US Undocumented Population Fell Sharply During the Obama Era: Estimates for 2016. Retrieved from http://cmsny.org/publications/warren-undocumented-2016/