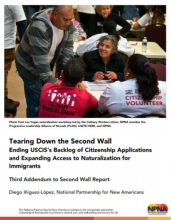 The National Partnership for New Americans (NPNA) released a third addendum to its Building a Second Wall report, which documents the growing backlog of naturalization applications since the start of the Trump presidency. The author suggests this backlog may be a “critical tool in the Trump administration’s attacks on immigrant communities” -- a tool designed to delay or deny citizenship to eligible immigrants.

Lawful permanent residents (LPRs) who have pending naturalization applications continue to be vulnerable to removal, deportation and changing immigration regulations in adjudication procedures. In addition, a new USCIS office was established to expedite stripping some naturalized immigrants of their citizenship, previously an extremely rare occurrence. According to the report, these efforts by USCIS and the Trump administration mark a shift from focusing on granting immigration benefits to reassessing and deporting lawful immigrants. Furthermore, according to the report, the reduced number of LPRs who are becoming naturalized citizens serves as a powerful tool in voter suppression. In response, NPNA and its partners launched a national campaign that seeks to reduce processing time to six months by building a coalition of elected officials to hold USCIS accountable and by continuing to report on this important issue. (Mia Fasano for The Immigrant Learning Center’s Public Education Institute)