A Rising Share of the U.S. Black Population is Foreign Born 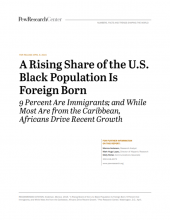 Since 2000, the foreign-born black population in the U.S. has increased by 56 percent, going from more than 2.4 million to nearly 3.8 million.

A Rising Share of the U.S. Black Population is Foreign Born examines the demographic, economic, and geographic characteristics of the foreign-born black population in the U.S. Using data from the U.S. Census Bureau's 2013 American Community Survey and the decennial censuses, the study reports that the number of black immigrants in the U.S. has quadrupled since 1980. Black immigrants now comprise 8.7 percent of the total black population, and according to Census Bureau projections, this percentage will continue to increase. While half of all black immigrants are from the Caribbean, with Jamaica accounting for 18 percent of the national total, the recent growth in size has been driven by African immigration. Between 2000 and 2013, the number of black African immigrants living in the U.S. has increased by 137 percent. The report finds that, compared to all U.S. immigrants, immigrant blacks are more likely to hold U.S. citizenship and speak English proficiently. It also finds that the U.S. black immigrant population is geographically concentrated in just two regions, the Northeast and South, which are home to more than 82 percent of all black immigrants. (Louisa Johnson for The ILC Public Education Institute)