Patent Pending: How Immigrants Are Reinventing The American Economy 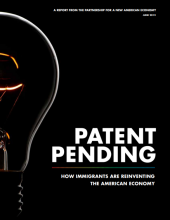 This reprt by the Partnership for a New American Economy examines the contribution of foreign-born inventors to the American economy. From more efficient ways to purify seawater to metals that can be molded like plastic, the report highlights several immigrant inventors in the U.S. behind the most cutting-edge technologies. These foreign-born inventors are fueling patent awards at the top patent-producing universities, and their new innovations and new companies are advancing American industries and creating American jobs.

Key findings of the report include:

More than three out of every four patents at the top 10 patent-producing US universities had at least one foreign-born inventor.

More than half of all patents were awarded to the group of foreign inventors most likely to face visa hurdles: students, postdoctoral fellows and staff researchers.

The almost 1,500 patents awarded to these universities boasted inventors from 88 different countries.