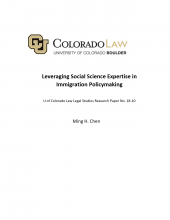 Why is social science expertise important in policymaking, and why is such expertise noticeably shunned in immigration policymaking, an area of governance often swirling in a sea of misinformation, prejudice, and political posturing? These are two questions that the author of this paper seeks to answer. She begins by reviewing the history of the "administrative state," which was "democracy's way of dealing with the overcomplicated social and economic problems of today." Among the safeguards built into the modern state was "the creation of a professionalized civil service that would serve as neutral experts within a political system...promis(ing) both a substantive and structural check on politics." A second type of expertise came from outside government, in the form of independent researchers tasked with studying specific problems, either on an ad-hoc basis or through service on a wide variety of advisory bodies. Finally, legislation such as the Administrative Procedures Act spelled out procedures for securing public comment on proposed courses of action. The author points out that the rejection of expertise has been most pronounced in the area of immigration and has grown more emphatic since the Trump administration took control of the federal government. She discusses three areas where government policy has disregarded the weight of social science evidence: border control, crime control, and the treatment of refugees. She concludes by offering recommendations on how to enhance the role of expertise and social science evidence in immigration decision-making. One suggestion is to consult more closely with career people working in the various federal agencies who might have knowledge and expertise relevant to a proposed course of action. Another is to make greater use of advance notice and public comment before implementing any major change of policy. She also recommends strengthening the independence and professionalism of immigration courts. Congress could also mandate that policy changes be supported with studies that disclose the methods, assumptions, and data sources used in developing new policies. All of these steps are "particularly consequential in the midst of a populist moment that rejects expertise in the service of a virulent anti-immigrant policy agenda, and that relies on missing or erroneous data to strip immigrants of their most basic rights." (Diversity Dynamics)