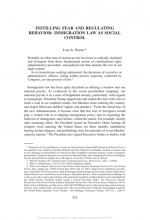 In "Instilling Fear and Regulating Behavior: Immigration Law as Social Control," Lori Nessel, Professor of Law at Seton Hall University School of Law, argues the plenary power doctrine, which shields immigration law from constitutional scrutiny, coupled with the Trump Administration's targeting of all undocumented immigrants for deportation, have created a climate of fear in the workplace, which creates a "largely compliant workforce," unable and unwilling to assert their rights. Rather than being an unintended consequence of immigration enforcement, she suggests that this policy is "a means of creating an obedient workforce and community." Low-wage undocumented workers, for example, are more than twice as likely as low-wage American workers to suffer minimum wage violations, yet they are reluctant to report labor, wage, and health code violations for fear of employer retaliation. Moreover, immigrants refrain from seeking medical treatment and even sending their children to school, worried that in so doing, they will expose themselves to deportation. By focusing attention on the domestic implications of immigration law enforcement, she joins other commentators in calling for greater judicial scrutiny and constitutional protections for immigrants. The article reviews the evolution of immigration policy as a tool for social control going back to the 19th century. The author also looks for hopeful signs in recent court decisions meant to constrain the blatantly discriminatory policies of the Trump administration. (American Immigrant Policy Portal)