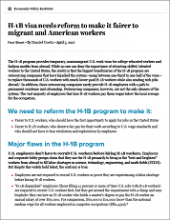 A more equitable job market for foreign- and U.S.-born workers alike is possible with reforms to the H-1B work visa program, asserts the Economic Policy Institute in this fact sheet. The publication outlines flaws in the H-1B program and suggests a series of reforms to protect both U.S. workers and "H-1B workers, who deserve fair pay for their work according to U.S. wage standards and who should not have to fear retaliation and exploitation by employers." The H-1B program provides non-immigrant U.S. work visas valid for as long as six years for foreign-born, college-educated workers and fashion models. Employers are then allowed to sponsor H-1B workers for permanent residence. An estimated 460,000 H-1B workers are employed in the U.S. and upwards of 85,000 new H-1B visas can be issued per year. Yet, problems with the H-1B system allow some employers to exploit foreign-born workers and prevent qualified U.S. workers from applying for job opportunities. For example, although U.S. employers are required to recruit U.S. workers first before seeking H-1B workers, there are two loopholes to circumvent this rule: hiring an H-1B worker with a master's degree or paying the worker an  annual salary of at least $60,000, which is $21,000 lower than the national median wage for workers in computer occupations. To avoid these and other issues, the fact sheet proposes requiring employers to recruit U.S. workers and offer jobs to qualified workers before hiring H-1B workers, and requiring that employers who cannot find qualified U.S. workers pay H-1B workers no less than the average local wage for the job. (American Immigrant Policy Portal)