Entrepreneurship and Innovation in Welcoming Cities: Lessons from Chicago, Dayton, and Nashville 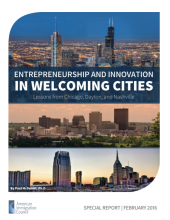 Playing a disproportionately large role in revitalizing communities throughout the United States, immigrant entrepreneurs should be considered in policies and initiatives seeking to boost overall economic wellbeing.

This is the argument that Paul McDaniel makes in the report Entrepreneurship and Innovation in Welcoming Cities: Lessons from Chicago, Dayton, and Nashville published by the American Immigration Council. Using interviews with researchers, business owners, government officials and community organizations, the report compares programs in Chicago, a major immigrant hub, Nashville, an emerging immigrant destination, and Dayton, a city with a small but growing immigrant population. The author details how the three cities designed entrepreneurship initiatives for immigrants to achieve broader economic growth. Rather than relying on top-down approaches, all three cities sought the input and participation of a wide array of community partners. In Chicago, for example, a New Americans Plan was created which reduced barriers to launching restaurants by streamlining the application process and providing a multilingual guide. The city also held entrepreneurship events that were specific to different ethnic and racial communities. The report concludes with a listing of best practices that can be adapted by other cities such as highlighting the importance of community-driven efforts and garnering public support for welcoming initiatives from local officials. (The Immigrant Learning Center Public Education Institute)