The Economic Impact of Immigrants in Minnesota 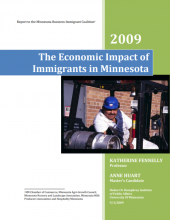 Minnesota has a small (seven percent) but rapidly growing population of both documented and undocumented immigrants. In this report, information on the estimated fiscal costs and contributions of immigrants in Minnesota is summarized.

Findings include an estimated national net gain from immigration of $37 billion per year. Immigrant-owned businesses generated $331 million dollars in net income to Minnesota in 2000. Hispanic-owned firms in the state have grown 350% since 1990. Foreign-born workers account for the majority of growth in the labor force in Minnesota.

Additionally, the U.S. Labor Department reports that the nation has an immediate shortage of 126,000 nurses yet the average wait for a nurse to get a "green card" is six years. Rural Minnesota alone faces a predicted shortage of 8,000 RNs in the next decade. Without new, young workers, certain sectors of the economy will continue to contract; by one estimate, if immigrants were removed from the labor force, Minnesota would lose more than 24,000 permanent jobs and $1.2 billion in personal income.

The report concludes that immigrants constitute an important resource to the nation and to the state as a result of their entrepreneurial activity, consumer spending, tax payments, participation in the labor force and their less tangible but no less important contributions to the social and cultural diversity of Minnesota.