Economic Anxiety or Racial Resentment? An Evaluation of Attitudes toward Immigration in the U.S. from 1992 to 2016 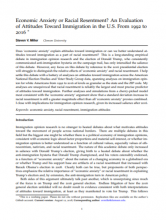 The 2016 U.S. presidential election intensified the debate over whether anti-immigration attitudes are due to economic anxiety or racism. While many journalists suggested that it was due to economic anxiety, statistical analysis conducted by Steven V. Miller of Clemson University found that “racial resentment” is the main and most reliable predictor of attitudes toward immigration.

In “Economic Anxiety or Racial Resentment? An Evaluation of Attitudes toward Immigration in the U.S. from 1992 to 2016,” Miller analyzed American National Election Studies data from 1992 to 2016 and Voter Study Group data from 2016 to determine whether anti-immigrant attitudes were caused by economic anxiety, i.e. a perceived or actual threat to the economic self-interest of the respondent, or racial resentment, i.e. the belief that immigrants or other minorities are violating core values of the white population. Miller’s findings indicate factors such as negative racial stereotypes, belief in Christianity and the English language as central to the American identity, perceived threat of the Spanish language and resentment towards the perceived lack of assimilation of immigrants were more likely to influence anti-immigration attitudes. In fact, Miller found no relationship between higher unemployment and an increase in votes for right-wing, anti-immigrant candidates. Miller concludes that media outlets must be careful not to assume an economic basis for anti-immigrant attitudes. (The Immigrant Learning Center’s Public Education Institute)

Miller, S. V. (2018). Economic Anxiety or Racial Resentment? An Evaluation of Attitudes Toward Immigration in the U.S. From 1992 to 2016. [Working paper]. Retrieved from https://github.com/svmiller/earr/blob/master/earr.pdf