The Contributions of New Americans in Ohio 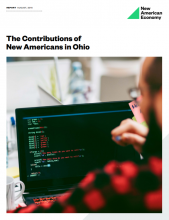 New American Economy has produced 51 reports on the contributions of new Americans in each of the states and the District of Columbia including the impact of immigrant entrepreneurship on local economies and estimates of the number of jobs that might be created locally from an increase in the availability of employment-based immigrant visas. Ohio is home to more than 480,000 foreign-born residents making up 4 percent of the state population. Despite their small share of the population, Ohio immigrants are 32 percent of software developers, 29 percent of physicians and surgeons, and 18 percent of postsecondary teachers. Immigrant-owned businesses generated $531.9 million in business income in 2014, and the state’s foreign-born households were able to contribute more than one in every $20 paid by Ohio residents in state and local tax revenues. (Crystal Ye for The Immigrant Learning Center Public Education Institute)