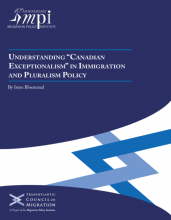 This paper explores why "Canada is far more open to, and optimistic about, immigration" than the United States and countries in Europe. Despite having the highest proportion of immigrants to total population of any other Western country (about 20 percent), public opinion polls suggest that Canada is a "striking outlier." As an example, about two-thirds of Canadians in 2010 said that the number of immigrants coming to Canada was "about right."

The author cites a number of reasons for these positive attitudes including:

the Canadian point system, which screens prospective immigrants for their potential to contribute to the Canadian economy and integrate into society (59 percent of new permanent immigrants to Canada in the first decade of the 21st century were economic migrants);

the political power of immigrant communities (Canada has a high naturalization rates); and,

the importance of multiculturalism as a marker of Canadian national identity.

The author does not gloss over potential problems including the growing reliance on temporary visa programs, which could spur the development of a larger unauthorized population in the future, and the problem of unequal economic outcomes for "visible minorities." However, Canadian "exceptionalism" could become the norm in other Western countries as other transatlantic societies "modify their national identities in the face of growing immigrant and second-generation populations." (Abstract by Prof. Nick Montalto)