Revving Up the Deportation Machinery: Enforcement under Trump and the Pushback 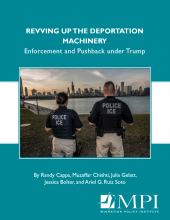 Revving Up the Deportation Machinery: Enforcement under Trump and the Pushback results from a year-long study into how immigration enforcement has been handled by the Trump administration. The enforcement environment, the report finds, has changed in two different ways. The administration has become much more aggressive in seeking to remove any unauthorized immigrant - regardless of whether a crime has been committed. However, the report finds that arrests and deportations are about at half the level during their peak (2008-2011).

The chief cause is the increasing resistance of state and local jurisdictions that are reducing their cooperation with Immigration and Customs Enforcement (ICE). In the first year of the Trump administration, the number of ICE arrests at homes and in communities has increased; the share of arrests of immigrants with no criminal record has increased; there have been many more "collateral arrests" (arrests of others in addition to the intended target); low-priority immigrants are now routinely arrested during scheduled "check-ins" with ICE. These new policies, however, are not producing the expected results because jurisdictions are limiting their cooperation with ICE by, for example, refusing to honor ICE detainers, not entering into 287(g) agreements, and enacting other "sanctuary" policies. Some jurisdictions have taken other steps to reduce the likelihood that immigrants will be put into a situation where ICE might discover them, e.g. by decriminalizing certain minor offenses and providing alternative IDs for drivers. Some jurisdictions have provided funds for deportation defense. Advocates for immigrants have stepped up "know-your-rights" trainings and are monitoring ICE activities.

Regardless of how a jurisdiction is treating its immigrant residents, however, there is widespread fear in immigrant communities, and that has resulted in a measurable decline in business in immigrant communities. Public safety has been affected, as police report a decline in reporting of crimes, including domestic violence. The report concludes with the observation that arrests and deportations will probably never achieve the level seen during the Obama administration, due to the resistance of jurisdictions with large immigrant populations. Rather, there are growing disparities among jurisdictions depending on how they view immigration enforcement. These growing disparities are eroding federal pre-eminence in immigration. (Maurice Belanger, Maurice Belanger Associates).