Our American Immigrant Entrepreneurs: The Women 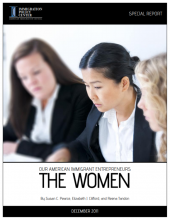 When Americans picture an immigrant entrepreneur, they likely imagine a man who began the migration of his family later bringing his wife over to become a volunteer assistant in the shop. This image is straying farther and farther from reality as more women open their own enterprises. Yet the idea that immigrant women might be the owners and originators of some of our restaurants, motels, Silicon Valley hi-tech firms, local real-estate agencies or other entrepreneurial ventures has yet to become conventional wisdom.

In this report, we asked women from a range of business sectors in several cities to tell us why and how they started their ventures, what challenges they faced, what their businesses mean to them, and what contributions they are making.­