A Portrait of New England's Immigrants 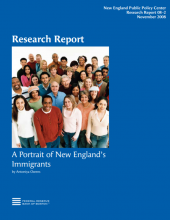 New England is home to 1.6 million immigrants. Their number is growing far faster than that of the native population. They are more likely than natives to be of working age. Moreover, they are better educated than immigrants nationwide, with more than three quarters having a high school diploma, and close to a third holding a bachelor’s degree. For all these reasons, immigrants contribute importantly to the growth of the region’s labor force.

The report reveals that despite the high educational levels of many immigrants, they are more likely to be poor, to live in crowded housing, and to lack health insurance than the native population. However, immigrants vary in the degree to which they tap public benefits compared with native citizens.

Lastly, the report examines immigrants’ civic contributions to their communities: their rates of naturalization and voting, volunteerism, and homeownership. Nearly half of New England’s immigrants are naturalized U.S. citizens—one of the highest naturalization rates in the country. They are also more likely to vote or do volunteer work than their counterparts in other regions, although they still lag behind the region’s natives.