The Geography of Foreign Students in U.S. Higher Education: Origins and Destinations 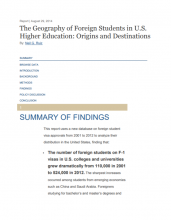 The number of foreign students at U.S. universities has increased almost five-fold over the past decade and has simultaneously pumped billions of dollars into local economies.

Those who stay on to work temporarily also make substantial economic contributions by bringing unique workplace skills and connecting local companies to foreign markets. These are the major findings of The Geography of Foreign Students in U.S. Higher Education: Origins and Destinations. Utilizing 2001 to 2012 data on F-1 visa approvals from the Student and Exchange Visitor Information System (SEVIS), this report, for the first time, measured the economic impact of foreign students on local economies rather than on the U.S. as a whole. It finds rapid growth in the number of F-1 students overall - 110,000 in 2001 to 520,000 in 2012 - two-thirds of whom study in the STEM (science, technology, engineering and mathematics) fields and business subjects, compared to 48 percent of U.S.-born students.  Between 2008 and 2012, most foreign students were concentrated in 118 metropolitan areas where they contributed $21.8 billion in tuition and $12.8 billion in other spending to the local economies.  On completion of their education in the U.S., almost half were able to work in the same geographical area where they obtained their degrees, thus providing valuable linkages to their home economies and important skills to employers. The authors suggest that realizing the full benefit of the presence of foreign students involves leveraging their connections with home countries to facilitate economic exchange and retaining foreign student skills by developing programs to connect graduates to local employers. The report includes charts showing the top overseas source cities of foreign STEM students, top metropolitan areas by "intensity" of foreign student presence, and top metropolitan areas by ability to retain students after graduation.

Get more information from Global Cities Initiative: A Joint Project of Brookings and J.P. Morgan Chase.