Primer: H-2B Visas Are Vital to Meet Workforce Needs, but Reforms are Necessary 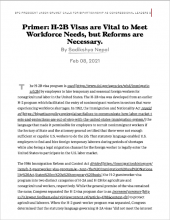 This brief gives a history of the H-2B visa program, available to workers coming to perform seasonal, non-agricultural work. Over the years, there have been a number of efforts to reform the program, as well as to raise the cap — currently set at 66,000 per year. The article also reviews the rules governing the application for and use of H-2B visas, designed to protect American workers and to ensure foreign workers receive the pay and hours promised by the employer. Currently, demand for these visas far outstrips supply. Employers have argued that the rules are overly burdensome. Others argue that the rules do not sufficiently protect American workers and that foreign workers are routinely exposed to abuse. The author concludes by suggesting that, while the economy and demand for labor have greatly increased since the visa cap was set more than three decades ago, the program must be changed in a way that balances the needs of employers, foreign and domestic workers. While the author suggests the program is in need of "major reform," no recommendations are included in the paper. (Maurice Belanger, Maurice Belanger Consulting)

Primer_ H-2B Visas are Vital to Meet Wo... Necessary.pdf
Citation: