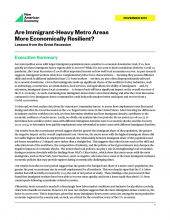 In 2015, every additional point in the percentage of foreign-born individuals in a metropolitan area was associated with an increase of nearly 800 more employed workers. However, past research shows that despite their complementary labor force characteristics, immigrant laborers are disproportionately affected by economic decline. Given that the immigrant workforce plays a significant role in numerous key industries, e.g. technology, food services, construction, and agriculture, the ability of immigrants to recover from the financial crisis is deeply tied to the broader condition of the American economy. To assess how immigrant density contributes to the economic resilience of cities following the Great Recession, researchers from New American Economy analyzed data from the 100 largest metro areas in the United States. The findings revealed that immigrant dense areas were generally able to recover more quickly from the recession than areas with fewer immigrants. Furthermore, while metro areas with the fewest immigrants saw the least amount of job losses, surprisingly, metro areas with the most immigrants did not see the most job losses. Instead, those metro areas in the middle, with average-sized immigrant populations saw larger job losses. The study suggests that metropolitan areas with a larger immigrant population tended to better preserve their growth paths during the Great Recession and to experience greater levels of employment and per capita income growth following the recession. (Flora Meng for The Immigrant Learning Center’s Public Education Institute)