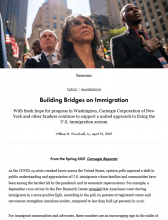 In 1941, President Franklin Delano Roosevelt gave the Four Freedoms speech detailing fundamental freedoms all people should be able to enjoy including freedom of speech, freedom of worship, freedom from want and freedom from fear. This speech inspired the name of the Four Freedoms Fund, a public charity and funder intermediary founded in 2003 and housed at NEO Philanthropy, which has the aim of growing and strengthening local and state networks of immigrant rights organizations in the United States. The Carnegie Corporation of New York’s report, The Four Freedoms Fund: A Philanthropic Partnership Helps Build a Movement, details the Fund’s history, mission and recent achievements. The number of participating funders has grown from the original five foundations to some 20 today. The report notes how the Fund has several strategic priorities including: building movement infrastructure on the state and local level, combating the criminalization of immigrants, and increasing immigrant civic participation. The Fund also aims to support capacity-building for grantees, provide rapid response funds to grantee organizations and encourage strategic communication on immigration-related issues. In 2020, the Fund distributed 214 grants to 144 organizations in 30 states and the District of Columbia as well as national support organizations, totaling approximately $16.4 million. Through the report, Carnegie seeks to encourage more funders to join this grassroots “movement for dignity, opportunity and equal rights.” (Erika Hernandez for The Immigrant Learning Center’s Public Education Institute)