The Globalization of Postsecondary Education: The Role of International Students in the US Higher Education System 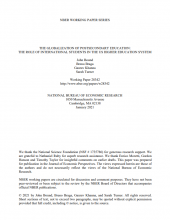 The United States is home to more international students than any other country. Between 1980 and 2017, the number of foreign-born students studying at American universities more than tripled to over 1 million. “The Globalization of Postsecondary Education: The Role of International Students in the US Higher Education System,” a paper published in the Journal of Economic Perspectives, explores the factors that encourage international students to attend American universities and the socioeconomic implications of their presence. Analyzing data from UNESCO, the authors find that the United States accepts the majority of its international students from a few primary countries: China, India, South Korea and Saudi Arabia. They are attracted by the plentiful educational and employment opportunities available here, and ushered along by the country’s relatively lenient student visa system. According to data from the Bureau of Economic Analysis, international students contribute to the United States’ economy in two significant ways: first through their tuition fees ($44 billion in 2017) and then through their participation in the labor market. Despite America’s reliance on international students, however, the once-steady growth of this population has waned in recent years. The authors hypothesize that the COVID-19 pandemic, expanding opportunities in other countries, and growing perceptions of anti-immigrant sentiment are significant dissuading factors. “Given the formidable levels of tuition revenue generated by foreign students, especially at the undergraduate and master’s levels, any reduction in the flow of foreign students would have a direct and negative impact on university resources that would not be easily offset by other sources of support.” At the same time, the larger economy would suffer without access to this talent pool. Although the researchers find it challenging to measure the magnitude of this loss, without careful consideration of “counterfactuals” such as the possible crowd-out of U.S.-born workers, they are inclined to think that the net contribution of international students has been positive. (Kyla Schmitt for The Immigrant Learning Center’s Public Education Institute)

Bound, J., et al. (2021). The Globalization of Postsecondary Education: The Role of International Students in the US Higher Education System (Journal of Economic Perspectives, 35:1). National Bureau of Economic Research. https://www.immigrationresearch.org/system/files/w28342.pdf