Are College Graduate Immigrants on Work Visas Cheaper than Natives? 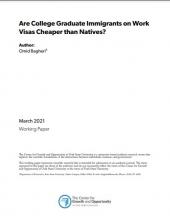 Between 2007 and 2017, the U.S. issued an average of 240,000 H-1B temporary work visas per year to highly-skilled immigrant college graduates. Drawing on the 2010, 2013, 2015, and 2017 cycles of the National Survey of College Graduates (NSCG), the Center for Growth and Opportunity analyzed the wage gap between immigrant college graduates working in the U.S. on a work visa and their U.S.-born counterparts. The NSCG provides a variety of socio-economic and demographic data, including detailed information on education and residential status. “Are College Graduate Immigrants on Work Visas Cheaper than Natives?” found that highly educated foreign workers holding temporary work visas have a wage premium of 29.5 percent over U.S. natives. These workers are, in short, not a cheap source of labor. The study also found that this wage premium decreased from 2010 to 2017, possibly due to an increase in the supply of highly educated workers. Across the period of observation, the study also found the wage premium varied based on country of origin, occupation, and field of education. From a policy perspective, the study suggests that an increase in the supply of highly skilled immigrant workers could help the U.S. economy and prevent jobs from moving overseas. (Georgia Whitaker for The Immigrant Learning Center’s Public Education Institute)