Why do Refugees Move After Arrival? Opportunity and Community 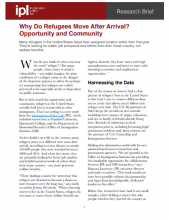 What do you think of when you hear the word “refugee”? For many people, what comes to mind is vulnerability—you might imagine the grim conditions of a refugee camp or the dangers of the desperate journey to safety. So perhaps it’s unsurprising that refugees are widely perceived to be especially needy or dependent on public assistance.

But in their search for opportunity and community, refugees in the United States actually look just as resourceful as other immigrants. That’s according to an IPL study from researchers at Stanford, Dartmouth, and the Department of Homeland Security’s Office of Immigration Statistics (OIS).

As they build a new life in the country, many refugees move to a different state soon after arrival, according to a new dataset on nearly 450,000 people who were resettled between 2000 and 2014. And when they move, they are primarily looking for better job markets and helpful social networks of others from their home country—not more generous welfare benefits.

“These findings counter the stereotype that refugees are destined to become a drain on state resources over the long run,” says study co-author Jeremy Ferwerda. “When choosing where to live in the United States, refugees do not move to states where welfare benefits are highest. Instead, they leave states with high unemployment rates and move to states with booming economies and employment opportunities.”