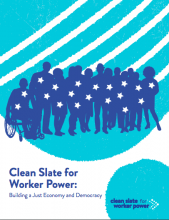 The 20 wealthiest people in the United States own more wealth (about half the nation’s assets) than 152 million others. Clean Slate for Worker Power: Building a Just Economy and Democracy argues that a fundamental redesign of federal labor laws is necessary to ensure that the American economy and democracy are equitable for all. At the heart of this redesign is the concept of countervailing power – a critical tool that working people can utilize in order to achieve a truly equitable nation. In designing its recommendations, the project engaged more than 70 advocates, activists, union leaders, labor law professors, economists, sociologists, technologists, futurists, practitioners, workers, and students from around the world. Eight working groups met over a nearly two-year period. The report discusses various recommendations that provide a roadmap to construct this new law. One of the most important recommendations is that the nation’s labor law should be inclusive of all workers including domestic, agricultural, and undocumented workers, and that a stricter test should be used for determining independent contractor status. Another recommendation calls for sectoral bargaining when a certain threshold of union representation is met, as well as fines for employers who penalize workers for organizing efforts. The authors further propose several additional policy initiatives, including creation of labor courts, a reform of the campaign finance system, and promotion of competition in the labor market. The authors specifically note the lack of advocacy pathways for immigrant and undocumented workers, and suggest that all laws protecting workers rights should be extend to non-citizens employed in the U.S. Although a federal redesign is highly recommended, the authors also point to the critical role of supporting worker innovations at the local and state level, as these innovations can create a solid infrastructure that paves the way for federal reform. (Stephanie DePauw for The Immigrant Learning Center’s Public Education Institute)