Investing in the Neighborhood: Changing Mexico-U.S. Migration Patterns and Opportunities for Sustainable Cooperation 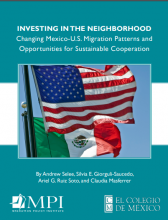 Current tensions between Mexico and the United States over migration—complete with divisive political rhetoric and unilateral U.S. actions affecting border communities—obscure an important reality: the migration challenges these two countries face are increasingly similar. Both are contending with large-scale mixed flows of humanitarian and other migrants from Central America, including many families and children travelling alone, and both have asylum systems struggling to keep up with a surge in requests for protection. They are also home to large numbers of each other’s nationals and grapple with similar policy questions when it comes to integrating these and other immigrants into local communities, schools, and economies.

To build understanding of the changing migration landscape and begin to develop a shared vision for future cooperation, the Migration Policy Institute and El Colegio de México convened the Study Group on Mexico-U.S. Migration in late 2018 and early 2019. The group’s members include leading experts from government, academia, civil society, and the private sector.

Informed by the study group’s discussions, this report begins with a snapshot of how migration patterns have changed—with the Mexican immigrant population in the United States shrinking since 2014, more Mexicans and their U.S.-born children moving from the United States to Mexico, and increasing numbers of Central Americans travelling to and applying for asylum in both countries. The report then explores policy options that could help Mexican and U.S. policymakers rethink key issues, including strategies for reforming asylum systems to enable timely and fair decision-making; and improving coordinated border management to facilitate the regular flow of goods and people, while preventing migrant smuggling, drug trafficking, and other illicit activities.