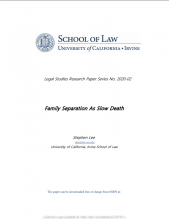 During the Trump Administration, disturbing images of immigration officials forcibly separating parents from their children at the U.S.–Mexico border have rightly invited an onslaught of criticism. Voices across the political spectrum have called these actions immoral and insisted that this is not who we are. The underlying moral imperative of this critique is correct, but this Essay argues that it rests on a mischaracterization of our immigration system. In fact, the principle of “family separation” pervasively defines our entire immigration system. The law governing admissions, enforcement, adjustment of status, and remittances routinely leaves noncitizens waiting, marooned, left out, and helpless in their efforts to remain or reunite with their family members. In other words, a legal system predicated on principles of family separation captures precisely who we are. To make this argument, I borrow insights developed by scholars in the humanities and social sciences who have developed the theory of “slow death” or “slow violence.” Unlike acts of “spectacular violence” (a label for which border apprehensions and forcible separations certainly qualify) the process of slow death happens over time, offering no signs of impending ruination, a reality that frustrates the ability to generate momentum for change. Reframing the experience of migrants in terms of slow death can help recontextualize immigrant suffering in terms of family separation thereby drawing the public’s attention to the need for systemic, and not just episodic, change.