Remembering Ellis Island’s Busiest Day: How Has Immigration Changed Since 1907? 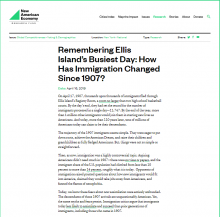 On April 17, 1907, thousands upon thousands of immigrants filed through Ellis Island’s Registry Room, a room no larger than two high school basketball courts. By the day’s end, they had set the record for the number of immigrants processed in a single day—11,747. By the end of the year, more than 1 million other immigrants would join them in starting new lives as Americans. And today, more than 110 years later, tens of millions of Americans today can claim to be their descendants.

The trajectory of the 1907 immigrants seems simple. They were eager to put down roots, achieve the American Dream, and raise their children and grandchildren as fully fledged Americans. But, things were not so simple or straightforward.

Then, as now, immigration was a highly controversial topic. Aspiring Americans didn’t need much in 1907—there were no visas or papers, and the immigrant share of the U.S. population had climbed from less than 10 percent to more than 14 percent, roughly what it is today.  Opponents of immigration raised pointed questions about how new immigrants would fit into America, claimed they would take jobs away from Americans, and fanned the flames of xenophobia.

Today, we know these fears about non-assimilation were entirely unfounded. The descendants of those 1907 arrivals are unquestionably American. Yet, the same myths and fears persist. Immigration critics argue that immigrants today less likely to assimilate and succeed than prior generations of immigrants, including those who came in 1907.

But just how different were immigrants who arrived in 1907 compared to their counterparts who arrived 110 years later in 2017? Thanks to the 1910 Census, we are able to answer some of these questions