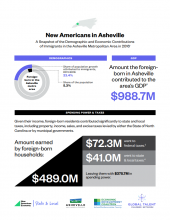 New research from New American Economy shows that Asheville’s immigrant households earned $489 million and contributed more than $113 million in taxes in 2016. The report, New Americans in Asheville, was produced in partnership with the Asheville Area Chamber of Commerce and the Economic Development Coalition of Asheville – Buncombe County.

The report highlights how important immigrants are to Asheville’s economy and workforce, even though they represent just 5.3 percent of the total population. Immigrants in the Asheville metro area are more likely to be working age than their U.S.-born counterparts (81.4 percent versus 61.4 percent). Immigrants also play a major role in vital industries like construction, where they represent 12.7 percent of the workforce, as well as tourism and recreation (11.3 percent) , and manufacturing (7.1 percent). In manufacturing specifically, immigrants preserved or created 1,076 manufacturing jobs that would have either disappeared or moved by 2016.