Putting Americans First: A Statistical Case for Encouraging Rather than Impeding and Devaluing US Citizenship 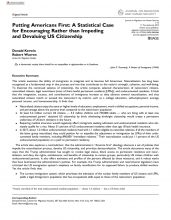 The Center for Migration Studies of New York (CMS) released a report finding that the well-being of immigrants and their contributions to the United States increase as they advance to more permanent and secure immigration statuses, culminating in naturalization. The report finds that naturalized citizens match or exceed the native-born by key metrics, including: college degrees (35% vs. 29%); percent employed (96% vs. 95%); and average personal income ($45,600 vs. $40,600).

The report – authored by CMS Executive Director Donald Kerwin and CMS Senior Visiting Fellow Robert Warren – argues that the administration’s “America first” ideology obscures a far-reaching set of policies that significantly impede the ability of immigrants to “move forward” on the path to naturalization, to their own detriment and the detriment of their families and communities.

“The report finds that policy makers should encourage naturalization rather than making it unnecessarily difficult,” said Warren. “Another important finding is that the US legal immigration system currently produces the same percentage of high skilled workers as the native-born population.”

“US citizenship represents the principle marker of full membership and equality under the law in our constitutional democracy,” said Kerwin. “Yet this administration has adopted policies to make naturalization far less accessible and to make citizenship a less secure and valuable status for some disfavored citizens.”