What Happens When the United States Stops Taking in Refugees? 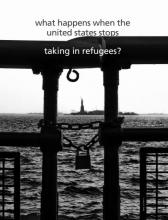 The United States has historically been a world leader in refugee resettlement. However the number of refugees accepted annually into the country has decreased drastically under the Trump administration. In this paper, Molly Fee and Rawan Arar use data from the Worldwide Refugee Admissions Processing System to discuss how the international refugee system has been impacted as the U.S. drastically cut its resettlement numbers. The authors explain how a Trump executive order in 2017, known as “The Muslim Ban,” set off a chain of events that has severely impacted refugees worldwide. The administration proceeded to slash authorized refugee arrivals from 110,000 to 50,000 in 2017, and by 2018, the number of refugee admissions shrank to 22,291 -- only 20 percent of the 2018 resettlement goal set by President Obama. The authors project that as a result of the Trump administration’s actions, the 25.4 million refugees registered with the United Nations will not only have significantly fewer options for resettlement, but the entire structure of international resettlement programs could be significantly weakened. In the U.S., the public-private partnership that has extended a helping hand to arriving refugees is being slowly dismantled. Overseas, refugees, who had previously been approved for resettlement in the U.S. languish for years in refugee camps. And other developed countries scale back their support for refugees following the U.S. example. The authors conclude that diminishing the U.S. Resettlement Program disrupts the entire refugee system, meaning that refugees worldwide would be further prevented from finding new homes and the protections of citizenship. (Lydia Grinnell for the Immigrant Learning Center's Public Education Institute).