Recruiting, Retaining, and Capitalizing on International Students at U.S. Universities 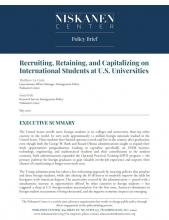 The United States enrolls more foreign students at its colleges and universities than any other country in the world. In 2017–2018, approximately 1.1 million foreign nationals studied in the United States. These students have limited options to work and live in the country after graduation, even though both the George W. Bush and Barack Obama administrations sought to expand their work opportunities postgraduation.

Looking to capitalize specifically on STEM (science, technology, engineering, and mathematics) students and their contributions to the modern economy, both administrations expanded the Optional Practical Training (OPT) program — the primary pathway for foreign graduates to gain valuable on-the-job experience and improve their chances of transitioning to longer-term work visas.

The current administration has taken a less welcoming approach by enacting policies that penalize and deter foreign students, while also altering the H-1B lottery to modestly improve the odds for foreigners with American degrees. The uncertainty created by the administration — paired with a simultaneous increase in opportunities offered by other countries to foreign students — has triggered a drop in U.S. foreign-student matriculation. For the first time, America’s dominance in foreign student recruitment is being threatened, and the negative economic impacts are emerging.

Foreign students and graduates are key demographics for maintaining economic dynamism in the 21st century. Failure to adequately recruit and retain international talent reverberates throughout the U.S. economy, leading to reduced productivity, fewer jobs, and the shuttering of educational programs that American-born students rely upon. The drop in foreign student matriculation comes at the expense of opportunities for native-born Americans — students, workers, and consumers alike.

This policy brief explores current policy regarding foreign students and includes an examination of the unique contributions these students make to the United States. Moreover, it offers policy recommendations that would allow the United States to better capitalize on the skills of foreign students, to the benefit of their university communities and the American economy at large.