Fixing What’s Most Broken in the US Immigration System: A Profile of the Family Members of US Citizens and Lawful Permanent Residents Mired in Multiyear Backlogs 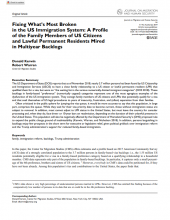 The US Department of State reports that as of November 2018, nearly 3.7 million persons had been found by US Citizenship and Immigration Services to have a close family relationship to a US citizen or lawful permanent resident (LPR) that qualified them for a visa, but were on “the waiting list in the various numerically-limited immigrant categories”. These backlogs in family-based “preference” (numerically capped) categories represent one of the most egregious examples of the dysfunction of the US immigration system. They consign family members of US citizens and LPRs that potentially qualify for a visa and that avail themselves of US legal procedures to years of insecurity, frustration, and (often) separation from their families.

Often criticized in the public sphere for jumping the visa queue, it would be more accurate to say that this population, in large part, comprises the queue. While they wait for their visa priority date to become current, those without immigration status are subject to removal. In addition, most cannot adjust to LPR status in the United States, but must leave the country for consular processing and, when they do, face three- or 10-year bars on readmission, depending on the duration of their unlawful presence in the United States. This population will also be negatively affected by the Department of Homeland Security’s proposed rule to expand the public charge ground of inadmissibility. In addition, persons languishing in backlogs enjoy few prospects in the short term for executive or legislative relief, given political gridlock over immigration reform and the Trump administration’s support for reduced family-based immigration.

Kerwin, D. & Warren, R. (2019). Fixing What’s Most Broken in the US Immigration System: A Profile of the Family Members of US Citizens and Lawful Permanent Residents Mired in Multiyear Backlogs. Journal on Migration and Human Security, 1-6. Retrieved from https://journals.sagepub.com/doi/pdf/10.1177/2331502419852925