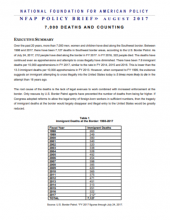 The root cause of the deaths is the lack of legal avenues to work combined with increased enforcement at the border. Only rescues by U.S. Border Patrol agents have prevented the number of deaths from being far higher. IfCongress adopted reforms to allow the legal entry of foreign-born workers in sufficient numbers, then the tragedy of immigrant deaths at the border would largely disappear and illegal entry to the United States would be greatly reduced.